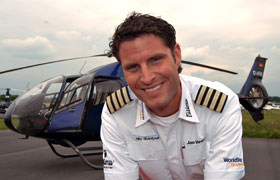 … flight instructor, commercial pilot and ownder of Jan Veen Helicopter Services. For 14 years, he worked for Heli Transair EAS. More than 6,500 flight hours and instructor authorizations for private pilots, commercial pilots, IFR and flight instructors are proof for his expertise. He has completed more than 19,000 landings, about 11,000 autorotations and owns not only the commercial pilot license (ATPL (H)) but also teaching authorizations for IFR, PPL, CPL and Fi. He is examinor FE(H) for PPL, CPL and Fi and in April 2012, the German Federal Office of Civil Aviation appointed him as examinor (H) SEN for three years. This grants him special authorization for the issuance of certificates for an extension of the Auditor-recognition. 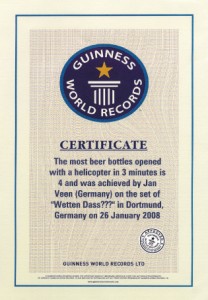 Not only his qualifications and flight hours are impressive: Jan Veen can also be found in a wide selection of magazines, newspapers and YouTube Videos. Through numerous TV- and radio-appearances,  as well as with trial courses for celebrities, he gained a significant degree of popularity. The highlight of his medial career so far was winning the show “Wetten dass…?” in 2008 by „opening beer bottles with a helicopter.“

Not only did he win the show, the Guinness World Records Ltd. also certified a world record.

Jan Veen in the IMDB